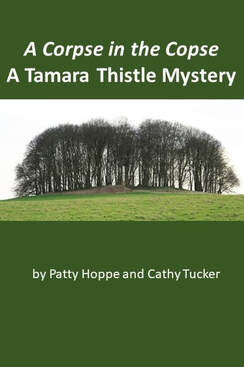 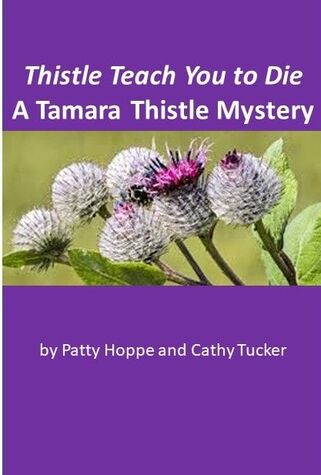 A life-changing inheritance, a town full of quirky characters and a dead body drive the plotline of Thistle Teach You to Die. Tamara Thistle, a former NASA scientist, finds herself in the middle of a murder investigation in Edenville, Michigan, a small town obsessed with all things Scottish. After uprooting her life, Tammy makes a major move north to Edenville to take over her aunt’s failing garden business, the aptly named Garden of Eden. Shortly after her arrival, she starts a total rehab on it and is shocked when a dead body is unearthed. Faced with unfounded suspicion from the town sheriff and some of the residents, she enlists the help of two new friends--who come to call themselves the Shamus Three--to prove her innocence and to discover the real killer.
As it turns out, Edenville residents harbor a variety of secrets and provide a long list of suspects. They include a hunky security guard, a new teenage employee of Tammy’s, a local attorney and his heavy drinking wife, several quirky townspeople, and even local law enforcement officers. Tammy must use her scientific powers of observation as well as her friends’ skills to uncover the motive and identity of the real killer. Along the way, she faces personal attacks and encounters a series of dangerous roadblocks to solving the case and its connection to a 19th century Scottish heirloom. This heirloom and the Shamus Three’s investigatory prowess provide the means to solve two crimes and clear her name. As a result of their success, the trio agree they will work together in the future in solving any town mysteries, large or small.

A Corpse in the Copse
​Fictional lakeside burg Edenville, Michigan, once again becomes the unexpected setting for murder in A Corpse in the Copse. Our heroines, the self-named investigatory team The Shamus Three, set out to decipher the clues and make connections to solve another crime in their town in the second in our cozy mystery series.
In this story, Mavis, Babs and Tammy are drawn into solving the murder of a transient worker who appears to have no known connection to anyone in Edenville. There is one major obstacle to their investigation: too many close friends and romantic interests appear to share a possible connection to the crime. Throughout Corpse, Babs humorously recounts several disaster dates, revealing a long losing streak in search for a romantic partner.  Her newest love interest becomes a suspect, along with numerous other characters who are friends and acquaintances of the trio of lady investigators.
The Shamus Three methodically analyze the crime, learn that a drone is connected to the murder and discover significant clues during a town scavenger hunt and fundraiser. They stubbornly persist in their investigations and re-visit the crime scene, only to be chased by a drone expertly and threateningly operated by an unknown person, most likely the murderer. Despite their fear, the Shamus Three manage to dodge the flying machine. They return to town safely, share their knowledge with the sheriff and his deputy and believe an arrest will be made. Ultimately, the three friends pledge to continue their amateur investigations of potential future threats to the safety of residents of Edenville.

Write off the Bookshelf background 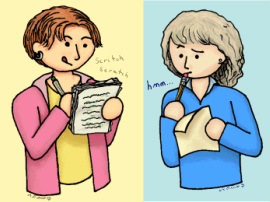 In the fall of 2011 we launched our new website "Write off the Bookshelf."  We formed our writing partnership several years ago and have penned a number of novels, essays, and film scripts. Now, with the increasing access to and convenience of reading e-books, we decided to join the technology revolution and publish online.

We have several people to thank for helping us get this project off the ground.We want to thank our friend and colleague, Kitty Mitchell, for supplying expert information on teen alcohol use and drunk driving from her years of study, teaching and research. Thanks also to master gardener and scientist Tammy Voss for reviewing the scientific/environmental information details for accuracy. Our typist and webmaster Bonnie McGraw deserves most of the credit for helping us meander our way through the technology of designing and creating a website and for saving us time by typing our documents into the proper format. Amanda Davis, one of our most talented student artists, created the graphics for both the books covers and the website itself. Most importantly, we thank our families for tolerating the numerous meetings, late night hours and general hoarding of computers. They also provided honest advice and feedback, sometimes painful, but always constructive. We appreciate all of you and hope you know we will continue to rely on your support!