Outside the Circle
Outside the Circle is an adventurous and moving story about how to navigate the aftermath of tragedy, and fight against bullying. Saddened and heartbroken, a teenager and her family learn how to fight back and deal with bullies at school and in the workplace. A must read for teenagers! - Priscilla Wade, PhD., Psychologist - East Lansing, MI

Jamie Callahan, an elite level teenage volleyball player, has faced almost daily bullying after an accident kills both her drunk driving mother and a popular classmate. Haunted by visions and nightmares, Jamie and her father move from Knoxville to the fictional Merrell, Tennessee, to start over.
However, they encounter even more problems in their new environment. It takes a community disaster to change their lives and shape the lives of those around them. Under the direction of a nefarious apparition, Jamie faces the obstacles in her way to achieve acceptance from her classmates. 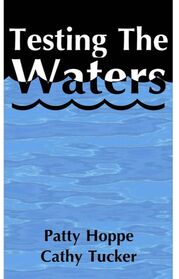 Testing the Waters is set in the Great Smoky Mountains National Park at a summer camp focused on environmental concerns. When several teens from diverse backgrounds gather together to explore the area, they discover animal deaths and deformities around a creek that resemble toxic poisoning.
​     Teens at a summer camp uncover a frightening sight at a creek bed that indicates toxic waste. A mystical figure guides them toward finding the answer to what caused it.
The teens take risks and defy authorities. They seek the help of an ambitious member of the press as well as that of a techno savvy camper who is ostracized for being dyslexic. One teen in particular, Reid Williams, has discovered months earlier that she may have inherited a psychic ability to see apparitions. These visions help her uncover the mystery of deaths and destruction of an otherwise pristine area of nature.
Throughout the novel, the "testing the waters" theme reveals conflicts and betrayals among the campers, but ultimately conveys a message of tolerance, persistence, and friendship.
​