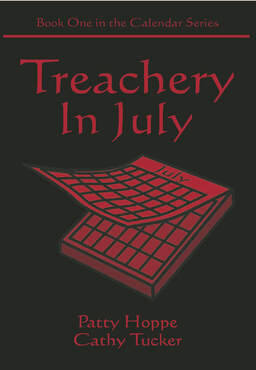 ​     Disaster stalks thirty-two year old Caroline Kelly from the first pages of Treachery in July. The story opens with scientist Ron Kelly, suspicious of internal sabotage at his BioMed research facility, as he rushes to a local bank to safeguard a copy of his current project. Before he can return home, he is killed by a hit and run driver.
His widow, Caroline Kelly, now the head of BioMed, attempts to finish her husband’s weight loss project, as she learns it has the potential to be worth millions. Ron’s death is the first of a string of unexplained accidents that plague Caroline. Before the story ends, her life is threatened over and over.
The people in her life all harbor secrets and several have apparent reasons to want her dead. Can she trust any of them, including a mysterious older man who appears to be stalking her?
Complications arise as Caroline works to uncover the secret research Ron was so protective of, a project that somebody wants enough to resort to murder. Will Caroline win the race to get Ron’s project to market or will someone eliminate her before she is successful?
Presto Springs Romance Mysteries
​
Presto Springs: A Recipe for Magic 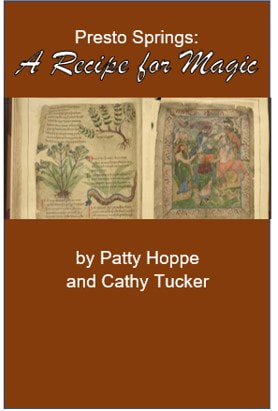 Residents of lakeside town Presto Springs, Michigan, are delighted to learn their growing community will be home to an upscale French bistro, La Magique, staffed by a trio of talented chefs. Complications arise though, when, after a successful opening and rave reviews, the eatery is forced to close after a suspicious attack of E.coli.  Presto Springs: A Recipe for Magic continues the story of characters from two previous novels in the Presto Springs series and adds some new names, all of whom deal with the challenges life and love brings.
Romantic moments are provided by singing sensation and summer resident Krystal Lawrence, star of the second in the Presto Springs series, A Magic Flame, and her new husband Jason. In addition, sparks fly between the head chef and La Magique owner Eric and Krystal’s college friend Tess Sinclair, brought into town to use her marketing skills to re-brand La Magique.  Like Drew, Tess’ heartbreaking romantic past has made her vulnerable and closed to new love until she is introduced to the chef.
However, suspicions that the E.coli outbreak was deliberately created to ruin his restaurant’s success causes complications in Eric’s personal and professional life. He and Tess find themselves falling in love but at odds with each other about the re-branding of the restaurant and their personal romantic pasts. In the end, a discovery of valuable historic relics on La Magique’s premises resolves the cause of the E.coli outbreak, leads to a successful re-opening of the bistro and assures a brighter future for them both.  Presto Springs has once again brought its magic to rescue two vulnerable people and change their lives forever. 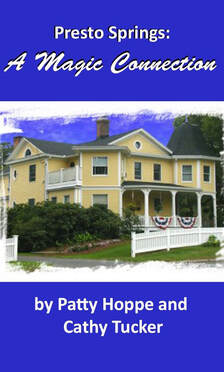 
​     He chose to wait it out. His camera man was not so patient. Anxious to capture the image of this one gunman in futile pursuit of his enemy, Tom Greene crept forward, knees bent, camera hugged closely to his chest. This video would definitely win an award for his mentor, Brent Wilson, reporter and television star…
Thus begins Presto Springs: A Magic Connection, the story of Brent Wilson and Stacey Richmond, two individuals suffering from past traumas, whose lives will intersect in Presto Springs, Michigan, a city known for magic endings.
Brent Wilson, after the death of his wife, is called back to his small Michigan home after his time covering the latest foreign hot spot. His five year old daughter needs a kidney transplant. Meanwhile, Stacey Richmond, a young professor in New Hampshire, decides to change her life completely after the death of her newborn and a failed romance   A friend convinces her to visit her in Michigan.  Nearing her friend's hometown, her car slides off the road during a thunderstorm and  into a deep ravine. Brent sees her crumbled vehicle and rescues her.  After learning of his daughter's medical crisis, as thanks to him, she offers to donate a kidney to his daughter. They fight a strong mutual attraction to each other as they deal with serious medical issues and attempts to discover Stacey's real identity,
Discovering Stacey has a talent for photography, Brent repays her by hiring her temporarily as a photojournalist for his small town paper. In that role, Stacey encounters a long line of people in her newly adopted Midwestern town who appear to harbor deep secrets, including her mother, her doctor, a national radio star from her past and, incredibly, Brent Wilson himself.
Caroline attempts to separate friend from enemy as her new life collides with her old one, turning past betrayals into a nightmare of twisted schemes and hidden truths. Can she forgive and forget family and friends before she forgives Brent and succumbs to the promised magic of Presto Springs? Despite their traumatic backgrounds, will it be too late for a happy romantic ending for Caroline and Brent?
​
Presto Springs: A Magic Flame 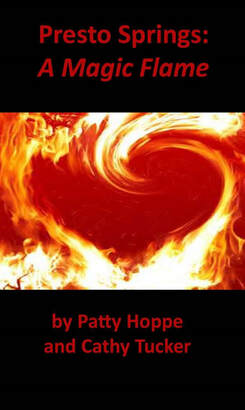 Presto Springs: A Magic Flame begins by introducing country music star Krystal, on top of the charts, as she performs at the LA Staples Center. Stalked by an unbalanced fan, she and her manager are injured in a disfiguring chemical attack. Forced into hiding by the FBI, she flees to Presto Springs, Michigan, disguises and isolates herself, turning to writing songs instead of performing. Meanwhile, she meets handsome Jason Lawrence and his young niece Claire, who was blinded earlier in the same accident that killed her parents. Her attraction to Jason is immediate, but a wary Krystal continues her disguised life.
Continually looking over her shoulder, Krystal is not sure who to trust. Is there a hint found in past relationships? Several people have possible motives to threaten her: a former lover and PR man who reappears in her life, his controlling and jealous wife, and a manager she doesn’t know if she can trust completely. A former college friend proves suspicious. Even the enigmatic Jason may have an ulterior motive for his instant rapport with her.  Other townspeople and some fans she has encountered through her career become suspects.
As the mystery behind her attack continues, a strong romantic bond develops between Jason and Krystal. Part of it is based on the affection she feels toward his niece. However, a shocking kidnapping by masked men means Krystal must help Claire and her escape from them during a life-threatening fire caused by a raging summer storm. Will she find the answers before it is too late for the happy ending promised by Presto Springs? Will she give in to the passion Jason ignited, or will it be too late for a happy ending to their romance?